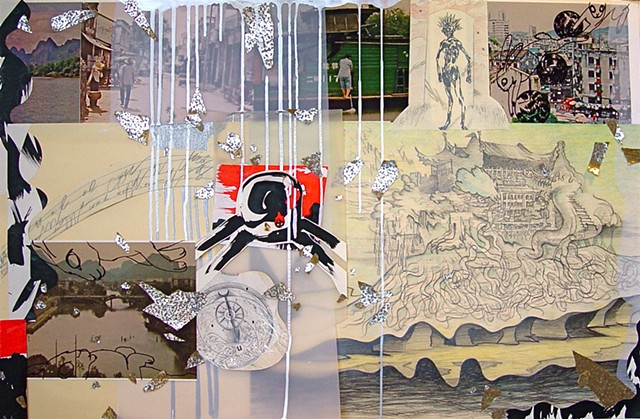 Here, the layering of materials alludes to the passage of time, and also movement through space. I took the photographs on trips to China and Macau in the 1980s. (Believe it or not, but you could fly RT San Francisco to Hong Kong in those days for $300-400, if you had the right contacts in Chinatown.) In this piece, the photos have been digitally printed onto rag paper, without editing, and collaged between gestural marks, vellums, ink drips, and delicate pencil drawings. This method allows me to suggest transition and build a visual rhythm, akin to film. The box-like or segmented areas of the picture plane are like flattened rooms in a toy house or series of stage sets, within which the game will be played; an action occur.

Some photos document pre-industrial street scenes with workers at daily tasks. Yet, my drawings construct an imaginary landscape influenced by readings of Chinese folktales, such as Lady in the Moon. Like the Greek Pandora, the Lady is banished to live on the moon for stealing a forbidden elixir, accompanied by the Jade Rabbit. This tale has been re-told for thousands of years, but more recently, has been adapted as a Chinese TV show, and interpreted by author Amy Tan as a children's story. Taoist-influenced myths about an underworld or alternative reality of mazes and tunnels (Dante-esque), are other influences.

Can't help feeling a sense of nostalgia and longing when viewing these old photos, as they provide a record of people and places that have long since been demolished or changed beyond recognition as China modernizes. They have become as fantastical as the accompanying drawings, as the boundaries between past and present, imagined or real, blur, overlap, and in some places, disappear.