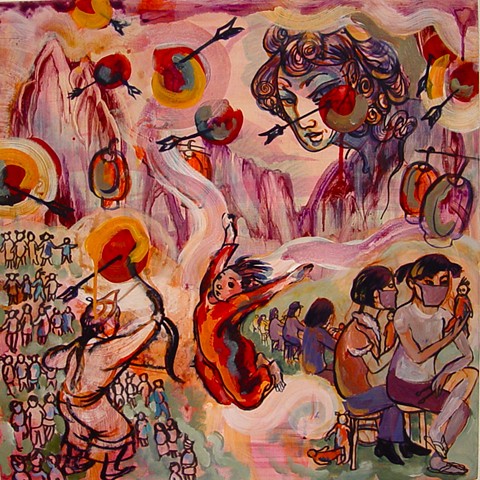 All of the paintings in this series were inspired by my reading of several Chinese Taoist myths, all of which are quite old. One of the oldest tales describes a time in the ancient past, in which a terrible drought has turned the land into a place of death and struggle. The sky burns with the heat of ten suns. A hero appears, and he eventually shoots down the suns with his bow and arrow, thus saving the Chinese people from disaster.

Although mythologies can be very complex, real life is even moreso. My painting introduces some other elements particular to the 20th-21st centuries. A few decades ago, the One Child Policy went into effect, as an attempt to curb population growth in China. This policy resulted in the abandonment of hundreds of thousands of girl babies, as sons are favored for various economic and religious reasons. Many girls ended up in orphanages. An international adoption program was developed, to find homes for some.

Today, most of the world's toys are manufactured in Chinese factories. In this painting I have included a depiction of these mostly young female workers, merging ideas about gender roles of the past with the present.

Americans are great consumers of these toys.